Today is Election Day, and in that spirit let’s consider an economic concept highly linked to former President Ronald Reagan, and how it relates to casino marketing. The cornerstone of “Reaganomics,” and pretty much all subsequent GOP economic plans, is a theory known as the Laffer Curve. Arthur Laffer, a professor at the University of Chicago, noted that when tax rates get too high, there is a disincentive to work, and total tax revenue actually falls. If your tax rate was 100%, you definitely would not work, and therefore would not pay income taxes. If it was 80% or 90%, some people might still work but plenty would not, keeping total tax revenues low. The main point is that when the tax rate is 0%, and when it is 100%, no tax revenue is collected — therefore the rate which generates the maximum tax revenue is somewhere between 0 and 100%. 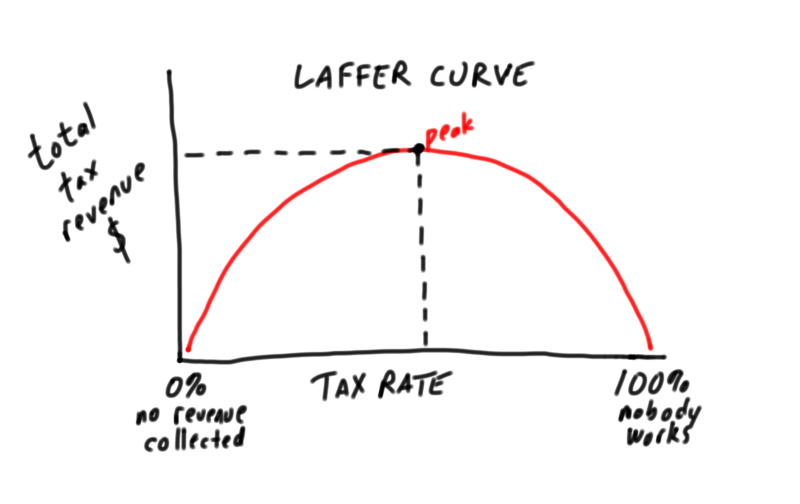 Ronald Reagan exploited the Laffer Curve, using it to claim that if elected, he would lower taxes and actually increase total tax revenue, which was a pretty innovative idea at the time. While campaigning in 1980, the top income tax bracket was as high as 70%. It seemed likely there was room to drop the rate and boost revenue, although nobody could know for sure what would happen. Arthur Laffer himself never claimed to know what the optimal tax rate was, so he couldn’t say whether a 70% rate was above or below the inflection point. In any case, today’s tax rates are much lower than in 1980, yet Republicans generally stick with the party line that lowering tax rates will lower burdens on businesses and on “job-creators,” therefore increasing revenue. Laffer never claimed that you could lower tax rates forever — he only says that revenue would increase by lowering rates if those rates are currently on the downward-sloping side of the curve.

So what does any of this have to do with casinos? Consider the discussion regarding Free Play. On one hand, marketers use it to drive trips and boost revenue, meanwhile the finance department sees a huge cost to the company, often the largest expense in the entire marketing budget. Regardless, there’s rarely much time spent determining the optimal rate. Instead, most casinos have a fixed schedule — something like, $100 average theo earns $10 free play, etc. — that is loosely based on tradition, some vague notion of what the total reinvestment rate should be, pressure from execs to either boost revenue or cut spending, and marketing’s gut feeling. But the Laffer Curve concept should be applied here — in fact it is custom-made for situations like this! Think about it — if you give zero FreePlay, then obviously it will not boost revenue or profitability. On the opposite extreme, if you gave everyone, say, 100% of their average theo in FreePlay, then it won’t boost profits either — most customers will play with your money for their entire trip. In one small deviation from the tax revenue curve, at 100% reinvestment, the profit boost will be lower than zero, as many players will not play with any of their own money. So somewhere in between is the optimal rate for providing the maximum profit boost. But do you know what it is? Have you tested multiple rates to see how customers react? 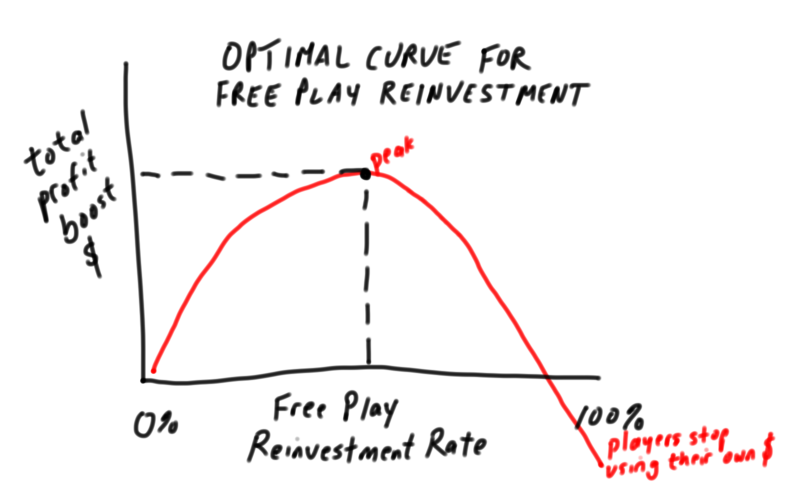 Notice that in the chart, the y-axis measures the profitability boost in dollars, and the goal is to maximize that. Not the ROI, or response rate, or profit margin. Your goal should always be to maximize profit dollars, not statistics. Finding the optimal rate is difficult — in all likelihood, it is different among various customer segments, and it’s usually a moving target, based on macroeconomics and your competition. But thinking of the benefits of FreePlay as a curve should help you better frame the discussion.

Thanks for reading! I'm Andy Goldberg, the author of this site and the founder of Centerfield Nine, a consulting firm dedicated to helping casinos become smarter, more efficient, and more profitable. We don't sell massive enterprise solutions — instead, we leverage your existing infrastructure, CMS, and data sources, and we produce results that translate into real, measurable dollars to your bottom line. Our goal is to work collaboratively with your executives and operators, empowering them to use data to make intelligent decisions.

If your casino struggles to produce timely and insightful analytics, if you are not getting the value you expected from your database and technology investments, if you are seeking new areas for revenue growth, if you'd like more accurate forecasting, if too many internal processes that should be simple, aren't... I can help! Please reach out and let's talk!